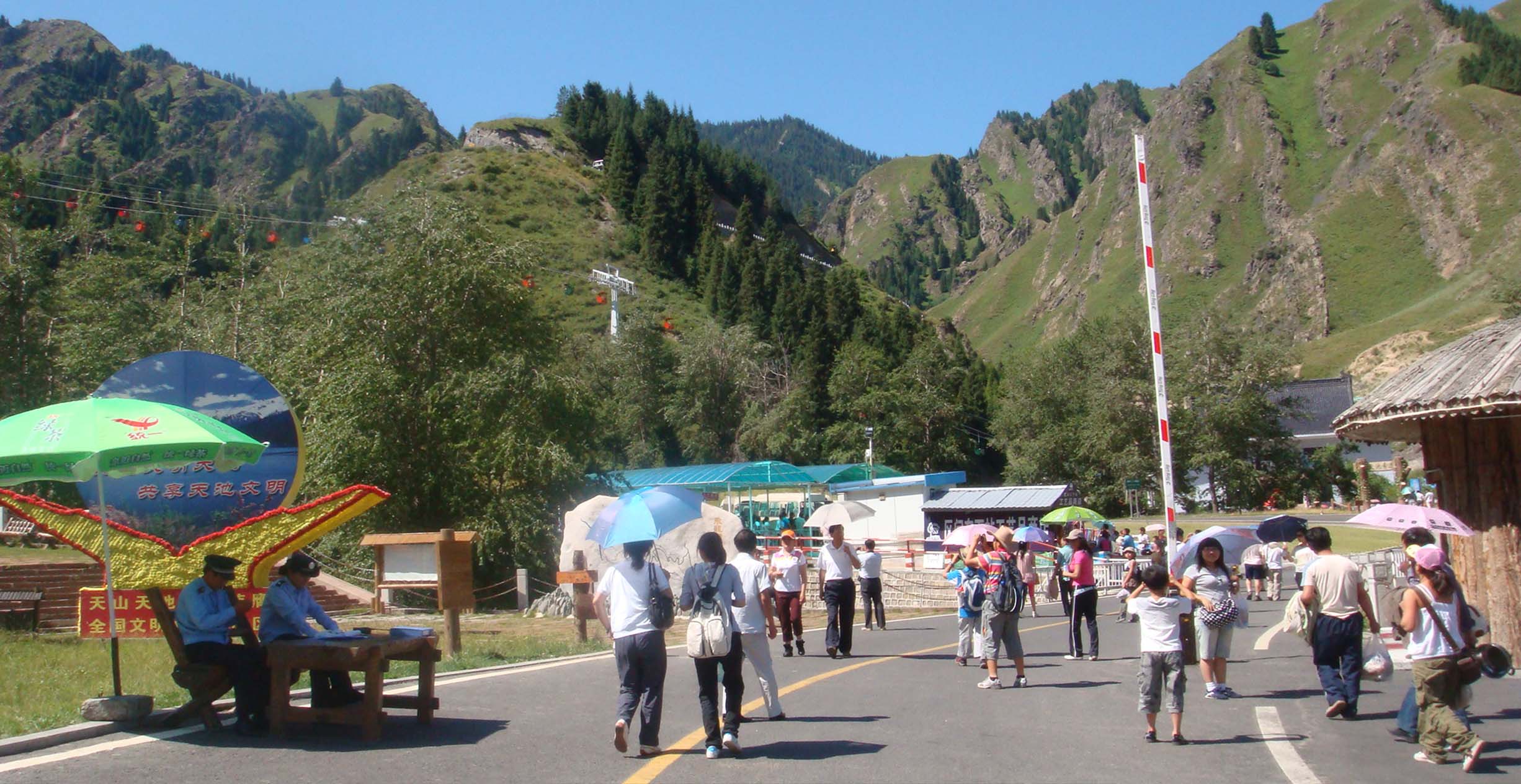 * Tourists drawn to Mountain of Heaven, plus historic towns, mosques

XINJIANG IN CHINA has quietly become one of the world’s top tourist hotspots—overtaking France. More than 158 million visitors came to Xinjiang, the scenic northwestern region of China last year, and the number is expected to top 200 million this year.

Xinjiang is already way ahead, with plans to welcome 400 million visitors annually by 2025. At the moment, thanks to the zero-covid status of most of China, most visitors are domestic, so the potential for post-Covid growth is huge, residents say.

Uyghur entrepreneur Aliye Ablimit of Kashgar told reporters that she had already turned her home into a bed and breakfast.  “Tourists love my house very much because of its Uyghur style. All the rooms are fully booked these days,” she said. Her monthly income is about 50,000 yuan (US$7,760), a healthy sum for what was until recently a poor region.

She has also joined China’s stunningly popular internet innovation: live-streaming sales. Until recently, Xinjiang was the world capital of cryptocurrency mining. However, as the central government soured on the sector, crypto specialists are moving out and farm sales by e-commerce is booming. Online sales of farm produce jumped by 35% to 12 billion yuan in 2020.

It’s easy to see why the northwesterly region of China is so popular: with dramatic scenery and a sense of unspoiled, natural beauty, it’s a powerful draw for people who need to escape from stressful urban life. Xinjiang is the location of the spectacular Tianshan Mountains, also known in Chinese culture as the Mountains of Heaven, and has lakes, rivers, forests, plains and even deserts.

Yet there are also modern, lively cities, with hotels and restaurants and modern entertainment—and an amazing range of food. But it’s perhaps the mixture of cultural elements which most delights the eye. About 44% of the 25 million population are Uyghurs, but there are also Han Chinese, Kazakhs and other ethnic groups. This means that there’s a huge variety of cultural buildings to visit and a wide range of restaurants – including McDonalds for American visitors who want a taste of home.

Xinjiang has more than 20,000 mosques, some of which are crumbling with age in the often harsh weather, and need investment. One of the most celebrated historical landmarks of the region is the Id Kah Mosque, in the beautiful ancient Silk Road city of Kashgar. Its Imam, Mamat Juma, said that more than 10 million yuan had been allocated for repairs by the local government.

While some mosques have been demolished, the mosque-per-capita figure remains high. The mosques in general “have been greatly improved,” Imam Mamat Juma told a reporter at CGTN. “They’ve been equipped with electronic displays, computers, air conditioning, and other facilities to provide a better environment.”

Of course we cannot mention Xinjiang without referring to a series of very harsh, shocking claims of mass murder, genocide, rape, and “millions” in “concentration camps” that started to come from groups based in Washington DC after a US-China trade war began.

While security in Xinjiang was naturally tightened after having suffered from a series of terrorist attacks between 2009 and 2016, and the authorities responded with characteristic heavyhandedness, the extreme allegations appear to be wildly exaggerated, and many individual reports have been debunked.

Moreover, the criticisms are based on a fundamental error, regular visitors say.

The critics assume that there’s an ongoing war between Uyghur people, painted as hapless victims, mostly in jail, and the local government officials, painted as uniformly Han Chinese.  “Whoever writes these horror stories doesn’t realize that many of the government officials in Xinjiang are of Uyghur ethnicity,” said a Hong Konger who has visited the region many times.

More than half of the representatives for Xinjiang in the country’s top political advisory body, the Chinese People’s Political Consultative Conference, are members of ethnic minorities.

At town council levels, the number of Uyghur participants is even higher. Some 73.5 percent (nearly three out of four) of township-level congress members come from Uyghur or other ethnic minority groups.

As the economy rises, the whole community benefits. Just 60 years ago, the average life expectancy of a resident was just 30 years. Today it has risen to 72, which is higher than that of Russia, or Belize, or Brazil. And they have money in their pockets, too. The average urban resident of Xinjiang earned just 319 yuan a year in 1978. Today it is 34,838 yuan a year.

How did China achieve this? “It prioritized eradicating poverty, building infrastructure, educating the population, prioritizing employment and providing affordable housing,” said Timothy Kerswell, a research fellow at the Chinese University of Hong Kong, in a report printed on the CGTN website. “More than 70 percent of the regional budget in Xinjiang is spent on welfare policies.”

What of the future? The western media will almost certainly continue reporting that millions are being tortured or murdered in death camps, but as more people visit Xinjiang, they will encounter the truth for themselves.

Visitors to the region quickly get to know the real Xinjiang. Uyghur restaurants, in particular, are known for their party atmosphere, with diners sometimes pushing the tables back to do some traditional dancing.

And the smell of barbecued lamb skewers and other Uyghur street food—to be found everywhere—soon gets visitors focused on seriously appreciating local culture in the best way.

Image at the top by Panoramio/ Wikicommons