YOU SEE IT everywhere, right? White guys with Asian women — it’s by far the most common combination of mixed couples in Hong Kong and elsewhere.

We like to pretend that modern cosmopolitan societies are mingling in a way that will turn us all into progenitors, literally, of a world in which we’re all a happy mix, or “coffee-colored people by the score”, to quote the 1969 song Melting Pot.

Yet certain patterns and common–and others are absent. Spend half an hour in Lan Kwai Fong and you see many Caucasian men with Hong Kong women. Asian guys with Caucasian females? Not so much.

There’s even a jokey, rather politically incorrect term for the way Caucasian males come to Hong Kong and show a high level of interest in local females: we say they have “yellow fever”.

The same combination of white guy/ local girl can be seen in Singapore, Thailand, the Philippine, Indonesia and so on.

Why is this? What’s the reason behind it?

Scientists have worked out why, and they can sum it up in a single word: dimorphism. Derived from classical languages, like most scientific words, the word “di” means “two” and “morphism” means change, as in the word “morphing”, which means changing.

The term is most often used in the study of animals to refer to sexual dimorphism: the fact that two sexes of one species differ markedly in shape. So a male lion has a mane of hair around his head, while a female doesn’t. A male peacock has big multi-colored feathers, a female one is small, dull and brown. The same is true of the mandarin duck.

But it’s not always the males who stand out. For an example of extreme sexual dimorphism, consider the fish known as the triplewart seadevil. The female one (the main one in the picture below) is 20 cm to 30 cm from head to toe. And the male? It’s that tiny thing underneath, measuring between one cm and three cm. 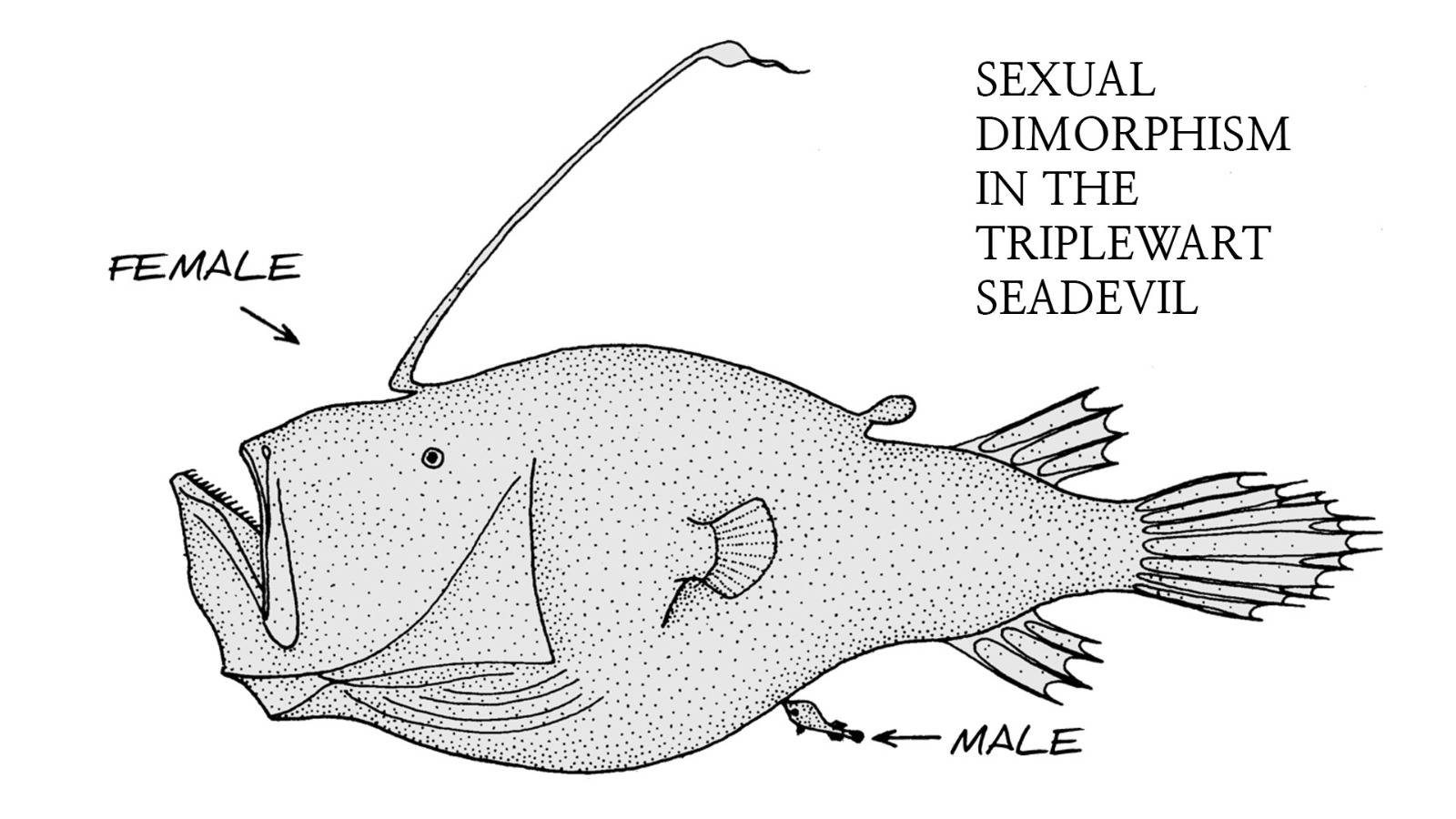 In humans, sexual dimorphism has some obvious factors and some less clear ones. Genitals and breasts are clear differentiators, but there are less obvious ones as well, such as internal differences and slight differences in face shapes.

Scientists note that there’s an average body mass difference of about 15 per cent, with men being generally taller and having more muscle mass.

There’s a clear relationship between these differentiating factors and perceived attractiveness.

In short, women tend to prefer men who are tall, with hard muscles and strong jaws, while men prefer women who are smaller, rounder and softer than they are.

What happens when you put Asian females in a room with Caucasian males? Ethnic differences kick in and end up multiplying the dimorphism factors.

Furthermore, with their even complexions and lack of facial wrinkles, Asian women generally look younger than Western ones.

There will likely also be personality factors, with Asian women perceived as being less likely to express loud personal opinions (although we probably all know exceptions). This works both ways, of course. Asian women find Caucasian men taller and more muscular than men of their own communities, and perhaps more “masculine” in other ways.

For example, there’s the apparent “metrosexual” quality of Asian males. We’ve all seen Hong Kong minibus drivers with their Hello Kitty collections on their dashboards — but are unlikely to see similar things on the dashboards of Western drivers.

These observations are, of course, generalizations. Yet the conclusion is clear. In combinations of Western male and Asian female, the dimorphism factors are exaggerated.

But what happens when a group of Asian males encounters a group of Western females? The dimorphism factors diminish significantly. The woman find that the men are no taller than they are, and may even be shorter. The men may weigh less, and their muscles are less defined.

These factors may not be consciously considered, of course, but operate on an unconscious level. A finds B attractive, but not C.

It’s interesting to note that a 2014 cross-global study of human sexual dimorphism (1) in multiple locations indicated that people respond to the differences far more in urban settings than in rural ones.

Locations included Shanghai and Hangzhou in China, as well as cities in Canada, UK and other places. The Princeton University study’s results suggest that responses to sexual dimorphism in human relationships were far stronger in modern, crowded, urbanized locations than in rural less developed ones.

The implication is that if you see a great many faces during the course of your day, you will develop a strong ability to differentiate–and thus pick out the best partner. This ability may be a rather recent development, the researchers said.

Another interesting observation is that dimorphism diminishes as the decades pass and sexual signals stop being important. Thus men will become smaller and less muscular, with higher-pitched voices, and women’s faces will become less feminine and their hair thinner.

And while East Asian women may look younger for longer, by the time they have reached retirement age, their age advantage disappears.